“We don’t have peaks without the valleys,” my AP history teacher had once said. That was 21 years ago. Words that at the time passed over my teenage head, fluttering into the realm of “adults think they know so much” attitude, now filter back into my headspace.

Life is hard. Life presents challenges that we don’t ever expect, never dream we could overcome, and make us breathless and tearful all at once. It can knock us to the ground so hard our knees lock out and our toes curl under.

As a junior in high school, I didn’t know what difficult times were left to come. Sure, I had a childhood pocked with congenital back issues, culminating in major back surgery. But I had shelter: from the worry of how to get through school while recovering from the operation, from how to deal with peers who were less-than kind when I had to wear a back brace for three years, from the physical healing and difficult choices that came along with such a major health issue. The shelter didn’t keep me completely dry from the storm, but the spattering of drops that made it through the barrier of my parents, my sister, and my grandma kept me from getting lost in the drenching waters that could have swept me under and towed me away.

As a young adult, I met my lifelong partner. My husband and I connected from the first day we met. He was added to my circle; he became my protector. Any valley I walked through as a youngster had ridden it’s way up to a peak.

When our first pregnancy ended unexpectedly in our child’s death, my husband and I nosedived into the lowest valley I had witnessed in my lifetime. The grief drug me down to a place so dark, so fiery, so fierce, it was likely the torture that only hell can claim.

We got pregnant again. We rose. Our new peak was lower in altitude than the previous one–as a loss of our child forever changed how I see pregnancy–but it was still a new high. It was a cautious high. One laced with trepidation and fear mixed with hidden joy and careful dreaming. When the miscarriage happened, I plunged. The hurt wasn’t as bad as when we lost our first, yet it stung more than my heart wanted to take.

A third pregnancy beget a hill. No longer strong enough for a peak, not nearly a mountain, the mound was gently rolling upward toward what seemed like a top I could see. It was out of caution; if I didn’t let it carry me away too far, I had less distance to drop.

And drop I did. But out of self protection, it was more of a ninja roll to the ground when the miscarriage happened. I picked myself up. I dusted off the grief. I cried when I needed to, I felt what emotions bubbled to the top. I never denied myself that right. Yet, it was less painful (although I didn’t love baby three any less).

When I was pregnant with Evelyn, I knew I had to cling to hope. Each day seemed better than the previous three times. We made it passed the first trimester. I was monitored weekly by various high-risk doctors. I took extra supplements and vitamins as suggested by our doctor. We made it past the twenty week mark–the point where we lost our first daughter. We ventured into new pregnancy territory.

Our past never left my mind, yet my subconscious fought my worries constantly. I dreamt of our baby, alive and well. When we were told she had similar abnormalities as our first daughter had, I knew that meant her legs were wrong. We never knew quite what that meant, other than clubbed feet and knees that were stuck out straight. We were cautioned not to expect her to be healthy. Or to live.

That night, I dreamt of watching her on the ultrasound screen. Her white frame was dancing and running. I laughed. Pointing to her, I wanted everyone in the room to see. When I woke up, the dream fizzled, but my feeling that all would be okay remained.

Evelyn was born with unknown issues, likely something genetic that mimics what her sister had.  But she was born. Alive. And lived longer than expected. We climbed out of the pregnancy valley once again, and found a new peak. This one high than any other I had encountered.

We work hard. We worked her legs, casted her feet straight, bought braces for walking, and stretched out her tight joints. Her timeline is different than other kids’. She didn’t crawl until closer to eight months, she didn’t pull up to stand until after one year and didn’t walk independently until she was nearly three. Despite the deflating mood when we work tireless hours with her, our overall trend is climbing higher and higher.

When she pedaled her own tricycle today without help, she triumphed again. Sure, her friends could do that at school last year, but they also didn’t find the immense joy in it as Evelyn and I did tonight.

The more we struggle, the more we appreciate all that is right. Gratitude is more intense. Tears are more joyful. My heart explodes with pride when she works hard and we blow past her delays. Without all of my losses, having Evelyn here would be sweet but not as miraculous as it is. Without her having gross motor delays, we’d celebrate her meeting her milestones, but we wouldn’t erupt with joy knowing just how much effort went into it. 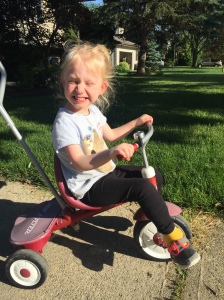 Without her not being able to ride a bike before today, I wouldn’t have been able to capture a picture of a child who realizes just how amazing she is.