The gray wheels collected a layer of dampened dirt as they dipped off the edge of the sidewalk. The pathway up to the front door of the school was long, and rounded, and not an ideal place for a two-year-old to be trying out her new walker outside for the first time. A chill in the air circulated down the front of my jacket, laughing at my attempts to raise the zipper as high as it would go into my neck. The wind gusts bounced off the nylon fabric, and my face, and back again into the air. My face reddened, but with the simultaneous numbing of my cheeks, I could not tell.

We stopped frequently. Pulling my hands from their cozy burrows in my pockets, I pulled her walker over and over again back to the cement.

She tried. When her excitement to reach the door so she could “beep” the key card overtook what ability a toddler has to steer a large metal frame on wheels, she found herself back in the mud. And I found myself again getting her back on track.

Patience is something of which I always thought I had an abundance. Working with youngsters in a school who suffered from various disorders, brain injuries, and who dealt with a multitude of delays, I did so with such grace that I often heard from coworkers, “you are an angel for the patience you have.”

Once, I worked with a young man who, diagnosed with Asperger’s Disorder, did not understand social norms well enough to stay in class, much less in the school building. I spent several school days chasing him down the street as he headed nowhere in particular, yet in reality was on his way down the busy road into Baltimore city. With a never-fail sense of authority, the principal always punished his behavior with a whole day’s detention, sitting in a room without the ability to leave. It was the very thing that had troubled him to begin with. Being confined. Feeling stuck. And now I shared in his misery as I, his assigned aide, had to sit with him. Eight hours of watching a kid squirm in a hard plastic chair took all I had to not scream in my own agony. Knowing that he suffered far worse than I, and that each night I could go home to my husband and feel safe and nurtured, I always found the empathy that he needed but was often nonexistent from others in his life.

Patience is something we do not recognize, often giving ourselves far less credit than what is deserved. Watching Evelyn meander down the narrow sidewalk, taking a good ten minutes to do a walk that would have taken me two, I felt my patience dwindle. Like a helium balloon that started out perky and crisp floating above all life below, I had started the walk from the car to the school with a noticeable optimism.

“This will be great!” I thought. “She will have so much independence!”

Now, eight minutes into our epic journey, I was shivering, my hood now snug around my ears. Parents lined up behind us, their children jumping up-and-down in an effort to be moving in some direction; any direction was better than moving forward at the pace of a snail.

“Go ahead,” I said. Even with a wave of my arm, they politely declined.

At the door, Evelyn’s smiled widened enough to expose all her teeth.

“I do it!” She cried with a glee that I had failed to retain. Mine had faded amongst the air particles, my balloon now half-deflated. 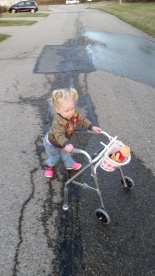 smile was a mixture of pride and anxiety. Watching my daughter work so hard to be her own person, to do what the other children did with such ease, made my heart swell. Glancing at the ever-growing line of parents and children, now extending several parties deep, made my heart race.

Even when my patience waned, it renewed. Each day I found more of the energy and enthusiasm needed to help a child with gross motor delays. While the other parents likely felt they were patient for not skipping ahead of us despite our sloth-like pace, I had the patience to do the slow walk, correct her errors, offer cheers and words of encouragement the whole way–AND, I did it again and again.

In this moment, studying the sympathetic smiles that the other adults offered me, I realized, in an endurance race, my patience would outlast those who waited for us. Even when I felt my patience wilt to nothing but a rubbery shell shriveled on the ground, I remembered that what I offer my daughter is a lot. It is more than I give myself credit for.

By the time she came home from school, my patience re-inflated. My balloon hung happily above my head, dancing in a new wind of optimism as she completed her therapy exercises. The evening news droned on in the background, my husband washed dishes from our family dinner, and Evelyn giggled on the floor as she played with her Elmo doll. In these normal moments, I realized that to raise a child with any type of delay, it takes anything but normal.

All those years ago, when I followed that student up the busy city street in an effort to keep him safe, I never questioned it. I did what needed to be done. Patience grew from what I naturally had.

With my own child, my love cultivates my patience beyond my so-called “angelic” years working in the school. And while none of us has infinite patience, some of us are close. If those school staff members saw me now, they may even say I have been upgraded to “saint”.

I have been working on this memoir-style project for a while now, and I'm excited to share it with others. My hope is to get as wide an audience as possible, and to receive comments, suggestions, and ideas to improve and expand what I have. I also want to encourage others to become curious about the topic of babies, and the loss that can come with the adventures of trying to start a family. In the world of celebrating healthy babies, we who know otherwise need a voice too. View more posts